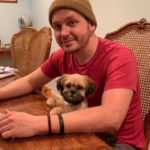 I’m sitting on my dad’s porch. We are planning on doing some work on a small piece of property I’m thinking about building a house on in the next few years.

Before we go over I have a call with a local representative about how we go about changing schools. Specifically, I think every school should offer either an African American Literature or History class.

I tell my dad that’s my goal. But I think it should actually be mandatory.

He asks, “for white people?”

I say, “Of course, for all people. But especially for white people. They need it more than anyone in my experience.”

He says it doesn’t make sense. It’s not our heritage. I disagree with him. Every American has more in common with African Americans and their history than any European.

He threatens me with my heritage.

I tell him I’m happy to hold our ancestors accountable for what they did yesterday, today. To be the change.

He’s uncomfortable. He’s squirming. At this point he’s used to me just accepting what he says.

“You’ll find that Slavery in America isn’t unique. Africans were buying and selling each other long before white people.”

I gently correct his misunderstanding.

He says I guess we need to take down all the George Washingtons and Thomas Jeffersons.

“Or maybe we need to put up a few others.”

He leaves on the John Deere to go mow. I sit on the porch and learn about how I can help, if I can help, and then join him to do a bit of work.

He pulls up on the tractor.

“I’ve thought a little more about it. We’d all be a little better off if we didn’t see race at all. That’s my position on it.”

I tell him why that’s not possible.

He goes in on social programs.

He tells me that he was in the military and that he had to work with everybody. And at first no black people were in the military. He didn’t know why that was.

This is maybe the one area of military history I know more than him. But barely.

He says every group of black people he’s ever been around just wants to be left alone.

I tell him that’s a symptom of oppression.

I tell him about Tulsa.

I tell him about red-lining.

About the great migration

I say to him black people tried to police themselves and the FBI dismantled it.

He says they tear down the ones that want to do good.

I say I think you mean they tear down the ones that they think are acting too white.

Also a symptom of oppression.

He doesn’t get that argument just yet so I have to let it go.

He pulls his final argument: “I guess you can take the family document of when we sold our slaves in 1836 to school with you when you teach.”

I tell him I will. It’s how I know I’m doing the right thing.