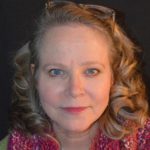 When I was 10, I was in the hospital for corrective surgery-
those were the days when they kept you a long time.
I heard the nurses and other night visitors rustling in my fruit basket –
an impressive gift from my father’s office, and I couldn’t eat it all, anyway.

My mother’s friend visited, and just leaned over the rail and looked in to my face.
I didn’t know how brave it really was at the time, but his own daughter never left.

A local lady donated a VCR and some movies for the children.
Since I was not actually sick, merely recuperating,
I was deemed photogenic enough for the paper-
a small girl with large casts that could take direction.

They arranged us in the common area, several officials standing around for the photo.
A big TV stand was wheeled in – while they arranged the shots,
I was watching raptly as the rabbits battled.

The girl who didn’t speak and always had an IV pole pulled out her line,
and bled silently on the floor as she gaped at the screen;
someone tried to clean her up while they got the lighting right,
at last they got their shot and their story –
hospital kids enjoying a movie, a respite.
They cut the medical applainces out of the frame.

Later I watched the movie in earnest, not quite getting the themes-losing of home and self,
fighting, losses, victories, peace in death. This would come later.

As I struggled to learn to transfer from bed to wheelchair,
I remember one old nurse whispering fiercely
“Some children here are actually sick and they learn to do this.”
I was afraid of bumping the metal rods in my legs –
When touched they sang along the nerves,
sloshing into my guts and leaving me light-headed.

I finally managed it and searched her face for approval.
She signed my cast “to my best girl,” and I got to go home.

5 thoughts on "A bunny movie"