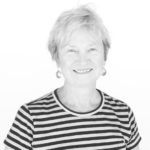 Billie, portly and paint-splattered
in his wheelchair,
holds court in his warehouse gallery with the flair

for his Old South taste but finally
her first stone collage
converted him with its clever wit.
He regales me with tales

of her last days when Parkinson’s destroyed
her painting but she could still wield scissors
like a surgeon.  Billie was an actor

with his gesturing hands, aglow
in the memory of her.
On her death bed she continued

to clip and snip and arrange fabric.
Even at the very end
refusing to slow down saying

Matisse died with a paintbrush in his hand.