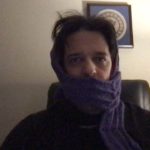 Colonel Porkchop played the spoons
at the tavern for drinks weeknights
and weekends in the saloon room
beneath the roof garden.
He ripped away rousing sets, spoons
carved and looped through
with ample scoopers, singing Amazing Grace,
and He Touched Me in the style of
the Dick Handler Quartet.

Porkchop was an older black gentleman
who liked to drink, wearing a ripped
black studded leather jacket, tight jeans
and red bandana across his brow.
It was 1983.
Too Shy by Kajagoogoo,
and I Guess That’s Why They Call It The Blues
by Elton John pumped through the speakers
when bands weren’t playing, but

every night we saw Porkchop wailing
some down country flurry like to pop
a wagon off a hitch running down his dreams
of cheap wine and liquor.  He would announce
to the bartender that for a round of five shots,
and two Millers, and a glass of red wine
he would take out his teeth, stomp the stage,
and play.

In musical terminology “spoons” are a concussion
idiophone, related to the castanet,
and the playing is known fairly well since
they were invented to primarily carry food to the mouth.
The male of the species especially has a need
to hit things and let people know he exists,
thus anthropologists deduce this crude instrument
was happened upon by man, whereas the actual
carving of this original spoon was not the work
of Homo Habilis – or “handy man” –
but most assuredly a female in the commune.

Porkchop was good at rollicking train rhythms,
lending a psuedo-Johnny Cash edge to his gospel
offerings. Porkchop would pop them on his shoulder,
down to his lap, and back to his hand.
He would croon, He touched me, oh-oh-oh he touched me,
and the joy that floods my soul….

We brought him drinks as tips.  He was happy.
By then he couldn’t have played the spoons anymore
if he tried.  He didn’t even care.
Later, passing him on a bench, neither did we—
going to our beds to finally lie down.