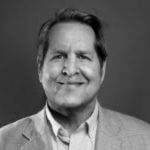 Bernie and I went down to Mexico.
This is after his wife Susan died
in a car accident. He still had the car
under a tarp in the garage. He showed
me the blood, her blood, on the steering wheel and seat.
He said he needed to let go, but not yet,
not yet.

In Nogales the locals place plastic flowers
on the graves of their loved ones.
Bold, beautiful primary colors
like those found on bubblegum ads.
I wanted to take photos, I had my camera,
but it felt disrespectful to the
families gathered there.
So we wandered over to Elvira’s
for two shots of tequila
and huevos rancheros, it still being before noon.

On the drive north we stopped
at an Indian casino. We got chips
and sat down at blackjack.
Bernie burned through his stack
in a matter of minutes — his was a
particularly pervasive run of bad luck.
When I was up a cool hundred,
we called it a day and drove
the rest of the way into Tucson.
I tried to pay him for gas,
but he wouldn’t take my money.

I still have two chips from that trip,
one red, one white, the colors
of carnations, bright as the Virgin’s tears.
I call Bernie, there’s a sigh on his end,
Not yet, he says, not yet.