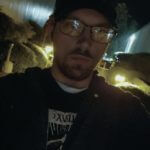 every tragedy
starts as somebody else’s
sin of omission

for every fight
engaged there is another
man on the sidelines

do you ever think God revisits
His promise not to destroy humanity again?
I wonder beside a moonless ocean
the edge of divine temptation
lapping at my feet