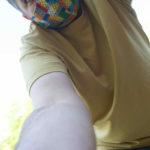 Feelings on changes a year makes

I shan’t do it, I won’t play the
cynic today: last year I wrote
despondent, “topographically al
one” and it wasn’t the truth, I
just couldn’t see the lie I told
myself — you are only as far aw
ay from others as you pretend to
be, only the self, imagined in
your now. Why this reversal? Aft
er all, what can happen in a yea
r to make such drastic change? I
suppose simply this—I am neithe
r, nor, both, and, between, beyo
nd. They are not as separate as
I would like them to be. Today,
then, I revel in another version
of myself, a me that comes and g
oes cyclical, periodic, undeterm
ined, interminable. Saying what
shall come after, I’ve come to r
ealize is unfair to it itself an
d to what came before; it preclu
des the in-between, the forks, t
he choices. Maybe that’s what it
was, the choices, those scary mo
nsters in my closet, waiting unt
il I, fast asleep, defenseless,
could be consumed. The current i
s as it always was, something in
which to swim, overtaking, over
taken, the struggle and the chan
ge. But I won’t pretend I’m ther
e by myself when others surround
me