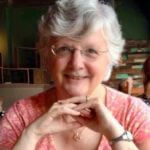 For Sallie Ann, Mascot Of The 11th Pennsylvania Infantry

You came to army life a pup, a gift
to raw recruits training on a county
fair ground. You learned the ways
of army life, drills and routines.

Twice, when war was still glorious
and victory assured, you paraded
proudly in front of your regiment,
President Lincoln in the viewing stand.

Too soon you learned war
was not grand. It was cold and hunger
and terror and death. You stayed
with your soldiers anyway.

Then, July 1, 1863. Outside
an obscure town in Pennsylvania
your regiment fought, fell back,
air full of gunsmoke and confusion.

You were left behind. For three days,
the battle that would make Gettysburg
famous raged. At its end, your troops
found you where they left you,

on Oak Ridge, guarding the wounded
and the dead. You almost made it
through the war. A bullet killed you
just months before Appomattox.

Today your effigy lies at the base
of  a monument, on the spot where
you spent three lonely, terrified days.
Only you have earned a bare earth

track tourist feet have trod
through lush fields, They come to stroke
your sleek bronze head, leave you
offerings of pennies and dog treats.

5 thoughts on "For Sallie Ann, Mascot Of The 11th Pennsylvania Infantry"