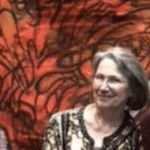 I grew up communing with
makers of antiques,
but not directly
My mother was a dealer
who showed me how antiques were
hand made, hewn, hammered and held together
She held my hand and ran it over surfaces
for knowing through touch and observation
How it might have felt to carve a design into wood
How a blacksmith’s hammer formed ironworks
How a pattern worked it’s way into a basket

I found myself approaching objects
almost like a parapsychologist,
a person thought to read objects
through clairvoyance to locate an owner,
but that did not happen with me.
Likely some form did with my mother,
as later in life she worked with police,
locating runaways through objects,
so I know she had a gift.
I never had that clarity of skill,
but I think I experienced something else
When I held objects —
I channelled the ghosts of the makers.
My mother directed me to read objects
and what I saw brought me somewhere else.
I saw value through the maker’s eyes,
I felt the objects as though I had made them
They taught me things
and something was ignited.

Now many of those
objects live with me.
It feels quite normal to live among ghosts.
I sometimes think
my mother’s antiquing quests
were a form of grave robbing.
She bought things from people’s
basements, attics and garages
— right out of their homes.
She collected ghosts.
— sold them in her business too,
and switched out old ghosts for new ghosts
When I would come home from school
something might be gone,
someone might be gone,
I would mourn them,
feeling a private sense of loss.