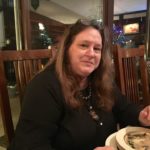 Haibun in Memory of a Hobo

Double-thick curtains drawn tight. The swish and flow of linen and lace. I peek through the long slash of light. “Do you think he knows we’re here?” my sister Kate whispers. “Don’t fret,” I reassure. “He’s already down by the boxcars.”  Mama started it by fixing him a tuna club with two pecan sandies. My sister thought he broke out of the state penitentiary. She made me double-bolt the front and back doors and the first-floor windows. Kate would chant: “Go away Jimmy Joe, shoo. Jump into that caboose ‘til it goes choo.”

I thought of him as St. Francis, tattered and cracked but in a good way. His incoherent mumbling was a code from the undercover angels. A cold front blew the day he disappeared for good. Six inches of snow and 5 degrees above zero in west Tennessee was a once in a generation event. I felt a crushing sensation inside my chest like a steam shovel hitting bedrock. I heard the news on the portable Silvertone. They found him frozen on the north shore of the Cumberland in a threadbare Woody Woodpecker sleeping bag, clenching the last hunk of a tuna and dill on rye in his ice-covered fist.

7 thoughts on "Haibun in Memory of a Hobo"