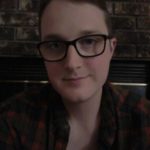 Imago Stage: Metamorphosis Is Always there

Two years ago, I was where the ocean meets Mississppi
training in the deep south summer
in the larvae stage of the next six years of my life
someone I’ll never see again asked
” why aren’t you a woman?”
it took me two days and nights to let it sink in
but the trigger had been set
it was time
that question couldn’t be left unanswered
so events lead to this
finding a counselor I can trust on the other side of town
and she asks me
“So, i like to keep things open ended and it seems you’ve done your homework so where would you like to start?”

when I was a kid
I could hop the chain-link fence like a real pro
never losing sight of the other side
the open spaces became foot-holds
until like the neighborhood cats I perched low on top, for balance
and whoosh land on my feet

I would pretend I was a sky-diver
or a jedi knight jumping into action, into the unknown with purpose
it was one of the few things I could do well then
that and climbing trees, the heights never bothered me
I would find a fit branch and take it all in
I must’ve seemed odd then
but these things left no sense of shame
not like the first time I was shown the difference
between boys and girls, and never to hop that fence
no matter how much I wanted to
so I became two people

I learned very quickly how sight can be distorted
when you’re too close to a chain link fence
and no matter how often they told me how we were all supposed to act
I never did remember the script, I flubbed my lines
I was sensitive, dramatic and gentle
I was too used to being quiet and too obedient for my own good
I couldn’t give less of a shit what was underneath the hood of your tractor
preferring to help my grandmother around the house
even if she didn’t really need it at the time
my folks weren’t blind they could see the writing
they just wouldn’t accept the wisdom
not grandmother though
she knew even then
the change was already gonna come
and she never stopped loving, regardless

I did my best to fit in
just couldn’t bear the disapproval
so i manifested my wants into vocational dreams
a director! a writer! an archaeologist! a cartoonist!
just anything but myself on planet earth
I wanted to make memories not reality
but to my peers i was nothing more than second string
an easy target
so under under the radar I stayed
even when the coast was clear

Throughout my youth  I never understood why I was out-of-place, only that I was and of course that does nothing to stop the constant flac from all sides about being Gay, Queer, Trans or Lesbian from the people I least wanted to dissapoint.

“So”, the counselor finally asked
after an hour of back and forth, in-beween her understanding air
” your experiences are very similar to other trans patients I’ve seen, so, what about being trans fits for you, makes sense to you…”
at first it’s like the feeling you get when you may have flunked a test-or passed
but, if you climb the tree
just high enough
step back from the chain-link fence
just far enough to get a running start
you’ll see the million ways of being human
feel yourself in that multitude
you’ll see the crossroads and know you are not alone
that all your years of hurt and confusion, attempts to fit in
feeling like a clown in your own skin
all point to this, to thine own self be true

3 thoughts on "Imago Stage: Metamorphosis Is Always there"