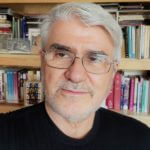 I watch from the regionale—afternoon train
From Lucca. It hugs the Serchio River,
Whose path carved centuries-long through hills
Where summits sport crowns of castles,
Home to feudal lords. Their memory marks my story
Of builders, architects from a medieval family.

The windows show me specters of my family:
They traveled this way on other trains
Before two wars, before I joined their story.
We share what hasn’t changed: the river,
This valley, towns tumbled from high castles,
And the embrace—green and immortal—of hills.

My first time here, this river, these hills
Mirrored the place that found my family
As immigrants, tenements replacing castles,
Brought from Ellis Island on trains
To find seven hills along another river,
The womb that birthed new stories

In a strange tongue: I heard stories
Of the sheep my Nonna had tended on the hill
Below the stone house far from the river.
She kept the memory of the family,
A brother with the partigiani, trained
To foil the enemy, lodged in castles,

Dug in along the Gothic Line, its castles—
Housing snipers, stuff of stories
Penned by Ernie Pyle; guns trained
On Allies inching up the muddy hills.
On one hill, a traitor, as told in the family,
Betrayed her brother. His ghost haunts the River

Lima, where the Bridge of Chains spans that river
And the gravestone bears his image by the castle-
Church in Fornoli. He rests there with family
Laid in rows, stones silent with stories
In the light of setting sun beyond the hills
As I step down from the departing train.