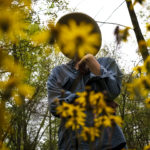 Our pasts flourish in our most present moments,
conjured by resonance and captured by now,
melding what was with what is
Beholder, wonderer, and historian of mind,
falling short of recollection
too often and never enough
Stories untold by graces of give and take,
instances rewrite memory’s splendor
It’s been months since time was defined by given names or counted by ticking hands on numbered faces
Drifting in some expanse of mirrored realities,
unable and unwanting to discern between now and then
Free from the clutch of constructs,
I wander in waking memories