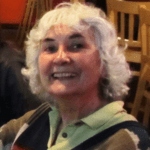 Hilly, proud, welcoming,
this city of fountains
is marked by a spectacular white
wave-shaped concert hall
poured onto the landscape,
a large spaceship waiting for us
outside the Convention Center.

In the Memorial’s shadow stands Union Station.
A flock of pigeons circles over waiting Amrack trains
in the second largest railroad station in the country.
An engineer climbs the side of the locomotive.
The pigeon is a determined creature, regardless
of the challenges thrown in its path.