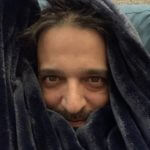 You are a goblet, faceted to shine. Begin here, listening.

You need not be my everything, fulfilling my desires—that is my work.

Listening to Beethoven’s Ghost trio, it coaxes, lures, and calls, but the tears are mine,

just as the fire of Mozart’s Requiem has my terror etched on the kettles and trumpet bells.

Ringing at Christmas bringing songs out of my heart, the year seemed to start over

but it wasn’t the music. It was not the finger, it wasn’t even the moon, rather the Earth

receiving the season, the melting snowfall witness to the next day’s sound of water—

where a sow’s ear is a catch for the music made by the rain soaking a screen door.

It tells all. What’s the use of crying? It was beaten into the students of my Catholic school

that finding good in oneself was a fool’s errand. To love, one had to be sent, like Jesus.

It’s as if such a thing would not occur to us. I honestly wonder sometimes

just when it dawned on him. When it came, was he running free at twelve years old,

or was he blasted at a wedding party, or was he reduced to shambles in Gethsemani

knowing if he walked out he would have forgotten himself?