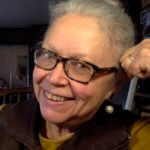 Something there is that doesn’t love an email.
That sends the wrong verb into it.
That splits infinitives just for fun
and makes logic gaps so vast
a hockey team could skate through.
The work of my dyslexic typing is another thing.
I have come after my clumsy digits to find Lousie for Louise.
The gaps I mean.
I don’t see my fingers type gamble for give
or magnetize for merit.
I let my correspondents know after I hit send what I intended.
They laugh at my quaint wordings and forgive.
I correct the lines between us in more emails, check each single letter
as I type.  Mutter a prayer before I hit send:
stay what I actually typed until someone reads this.
Oh, just another kind of indoor game—guess what I meant to say
then ask any question that requires an answer by the end of business day.
There where it is I do not need the autocorrect.
I have degrees in English, an actual hardback dictionary,
plus, a zealous word processor that underlines anything
I might need to look up.
Autocorrect says, I know and see wall.
I will rule your silly washing machines.
Spring is the mishap in me, and I wonder
If I can put a neutron in its head.
But why do you see walls?  Isn’t that where there are cows?
Poems by Frost? Before I saw a wall I’d ask if I’m delusional
or just throwing up stones to see where they spackle.
And from whom I was likely to horde washing machines.
Seriously, I just have the one.
Something there is that doesn’t love an email,
that wants it dumb.
I could say elves to it, but that looks way too much like Elvis.
And I’d rather just leave the King out of this building.
It grooves in chaos, it seems to me, far beyond bounds
of any Logic Board. And it likes having changed my words so well
it types with no hint of emoji, I knowledge and whistle.
I will wrestle your Wurlitzer, Wilma.