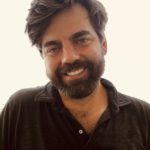 The orca figurine has tiny red eyes. And the ladybugs have moved
into the bathroom. My wife reads the newspaper and asks me
did I know so-and-so won a Tony. Children chase the cat. I nap to sounds
of organ and synth when a tone struck from this nowhere

pours me into the mold of a figure prone on a bed, staring at oblongs of light
as they play against the wall. Map or chart? Vanguardist art? Graph of amounts
and duration? Or nothing in the plain old sense, nothing but light moving
into and through apartment blocks built on each other like salt deposits?

The firemen have a nice life. They save us from ourselves, nobody needs
to be saved from them. They relax in lawn chairs under the open garage
or polish the chrome on their trucks or do their thing with the water, sirens, and lights.
Just their stiff overalls tucked into boots, ready to be stepped into, that makes me flush.

Let’s just bracket that whole business about rare earth metals.
It won’t make a difference to the pigeons or the lovers feeding them.
Life will go on and it will go on without us. Nothing wrong with that, kid.
You can’t steal the show if you’re the star, and the show is always better when it’s stolen.

One thought on "My Climate"