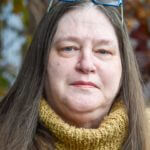 He called the six months he was in jail
his spiritual retreat even though many of the details
are grim, blood curdling. Best to hang

out alone in his cell where he reads
The Little Prince 30 times, teaches
himself to juggle oranges he’d hidden

under his gray metal bed. He invented
a folded paper tree using
a Reader’s Digest & made tiny

ornaments from candy bar
wrappings. One of the problems
with jail is social

& spikes of interaction. AB can decide
for you—no integration & if you refuse
their hierarchy one of them will mess

you up bad. After an AB facedown
he came up with a clever
strategy. He told the guards

camping mat with a texture like duct
tape. He was safe
& could chant & wail

out loud but people worried
he was losing it. Susan
made an SOS call to prison

about courage through the food
slot. He convinced
him to stop spooking

from a Hebrew prayer book, a gift
from Ernie. No matter that he didn’t know
Hebrew, the language was as comforting

as a handknit sweater. He embraced
& believed every word, sure that Rabbi
Ernie, with his jokester

self,  gave him attitude
& armor enough to face the gargoyles
of solitary, Ernie

was the only one
God could trust with the toilsome
task of getting him out.

16 thoughts on "Everybody Needs Rabbi Ernie "