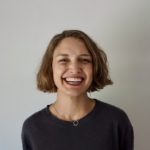 What is known is that the leaf released its poisoned juices, migrated, trapped under fingernail, spread from thigh to his face, ringing eye bright red, his ear bell, tickled around belly’s button, ribcage, buttock, the heart of it was the black point in the midst of the thigh, a thorn or dragon’s nail, tearing up, encased the boy in itchy fire. That the pond itself held that much in its clutches, that much in its hair, the green, viney, tangle too much for boyhood curiosity about the fishes, the logs like loaves floating. They stepped through ivy wanted human skin to cling to, human, the toad’s belch against the moss and scum. The toad-like sudden quiet when footsteps fall in mud, their surprised echo out beyond the human paused under honeysuckle, while the boys rummaged there at the pond’s edge. What leaves its prints that children then wonder belong to wolves, what grows next to the snake holes glowing in busted-up yellow light. And once the children left, what did they take that would continue to hurt them all night and for the better part of this week, make the slap of forehead a relief, cream spread on in a dark shower. What is released when the toad sound imbedded into their brain backs slowly into their dreams, when they lay all night without showering and nature’s fiery tongue licks from fingertip to fingertip and remembers a

One thought on "Poison"