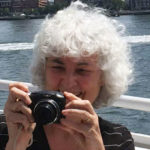 From the front row of every reading,
he photographed each writer who took the stage.
In our workshop, his measured comments on a poem
often ended with “This seems like it could go much further.”

His own poems plotted disturbing events in metered stanzas,
to make grief bearable in “Sam’s Hand” or to accumulate
irony in a poem about a boy drowning at a church camp.

His favorite poem was “Abide,” from a posthumous collection
about civil rights martyrs by Jake Adam York, who died at 40.
Jon died at 58, four months after we met.

I remember most his poems
about yanking livers and gizzards out of chickens for KFC.
I could not expect him to go further than that.

5 thoughts on "Remembering Jon Tribble at the Sewanee Writers’ Conference"