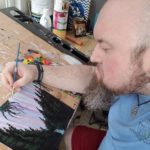 Rune of the Day: Mannaz (man)

Rune of the self, the self that drinks warm
chickenless noodle soup from a wooden bowl
while the world caves in on itself
and my youngest runs around in several-day-old
loose tighty-whiteys because he doesn’t sweat
in a quarantine and damn Father of the Year
over here, just turn off the fucking TV
and throw him in the backyard but no,
I like these cartoons too and I refuse to sweat
in a quarantine unless there’s food to make.

Who am I, sitting with bones on my lap,
weeping over another unjustifiable homicide,
weeping over my broken unmarching body,
weeping over no more Ale-8s in the house,
doing the same thing to treat all three issues
which is nothing, which is telling Amanda
to put down the phone before she gets too anxious
over the protest videos at bedtime, which is
white privilege if anything is white privilege?

I care so much I burn like a star.
I do so little I may as well be
a cold dead rock in the cold dying earth.