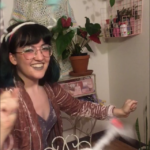 summoning with intent to coddle

My eyes are closed at my drafting desk
And I am scraping a little residue of concentrated evil
off the surface of a reality pressed against ours
Very delicately so as not to tear the membrane
Essentially using a teaspoon to remove paint from a balloon
But the teaspoon is narrowed and dense intent
and the paint is a grey thing that moves like a kitten
But sounds like a train’s compressed air breaks
which shrill at long distances
in a human way but at a jarring volume
I will isolate and neutralize it before it enters here
By showing it my favorite comedy movies and feeding it
Egg yolks, broth, lemon juice
Rubbing olive oil on its sharp little nose
So it quits coughing distilled fear onto the couch
washing it with dawn like oil spill ducklings
until the water stops running thick,
nose bleed red
salting its bed to remove the stench of malice
scratching its ears through black latex gloves
Until it stretches its blurred uncountable legs
and purrs
like a great engine churning in reverse
from an unknowably malicious goal

2 thoughts on "summoning with intent to coddle"