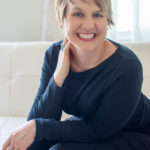 Homer’s Frosty Freeze was the only way
they knew to communicate.
It felt like something to order a slaw dog
and a shake. But when they talked
about geography all the missing pieces
told him she’d been to hell.
Corbin’s on the other side of London
and that was about it.

Just a skinny girl
hair frizzy as milkweed dander
He watched her sometimes in gym,
running like legs cast in irons
Would she remember what she said about the sidewalk?
That it was made of gas and rainbows and lazy rain?
He thought it meant something.

So they became husband and wife,
and she’d say, You don’t need stitches for that.
We don’t gotta talk about it.
And she told her mother on the porch
you know, when someone wants to die
to just get it over with.

He wanted her opinion on a piece of paper
he found on a corkboard at the store
he brought it home and read it out loud.
It was about God and maybe grace,
about being in the lowlands too long.
I don’t understand a word you are saying.

But she’d put apples in boxes under the eaves,
beans in jars, berries in the freezer,
dug a hole and put potatoes down in it
and covered it with a carpet rug.

4 thoughts on "That Willoughby Girl"