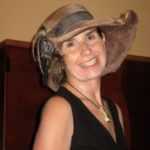 The Man with the Green Valise

Years fighting Bloody Corporate Greed on the other side of the pond
Etched deep crevices a furrowed dark lined brow delineating all North-South demarcations “I’ve earned everyone,” he proudly claimed
Smile creases erased
His was a ‘serious’ mask

With fresh scars he told us he was recovering from triple bypass surgery
no health insurance to cover his care
In France this was not alarming!

“Only intelligent party there is right now is that there Green Party . . .watered down Democrats is like havin’ a mint julep triple sec’d with caramel food colorin’ . . .”
His declaration echoed off the marble walled station
A tired soul screaming for a truth soapbox exclamation

Light began to fall on another Autumn day
As it grew darker we silently watched him order a Mint Julep
Telling us with a wry grin, ‘for old time’s sake!’

We said good-bye in the autumn of this life in the City of Light
Sharing the same question on our hearts
Who will be with us when we’re called to go?
None of knows the day when the conductor will say,
“All Aboard, do you have your pass? . . .