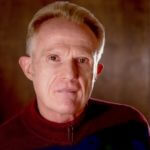 One of my fourth-grade English textbooks
included the tale of a little girl named Ellen
who went for dinner at a girlfriend’s house
for the first time & saw to her horror that
they used paper napkins instead of ones made
of cloth. At Ellen’s own home—or so I imagined,
with the help of pictures I’d pored over in
the Sears catalog—breakfast & lunch were served
with neatly folded napkins made of absorbent
cotton & rolled into cylinders caught at the center
inside napkin holders made of wood or painted
porcelain. At dinner the napkins were linen,
thicker than the best bedsheets but just as
soft, & folded into shapes like little tents pitched
atop the fine china. At the start of a meal,
her father would snap his napkin open
with a flourish, laying it gently across his lap.

Oh what a revelation it was to little Ellen
that paper napkins existed, or that anyone she
knew, let alone a family at whose modest table
she now found herself dabbing her lips & fingers
with what felt like sandpaper, would use such
shabby things! Oh how she pitied her poor
classmate, resolving on the spot to say nothing
about it at home for fear that her parents
might forbid her ever to return. That night
in bed—or so I pictured it—she cried hot tears
for her friend, to whom she swore always
to be kind.

At my own family table that night
I took notice for the first time that there were
no napkins whatsoever. There almost never were,
except for special occasions like the preacher
dropping by for fried chicken & deviled eggs
after church. At best we made do with a paper towel,
or wiped our greasy fingers on the same dishrag
passed among us like a collection plate, or on
our shirtsleeves since after all it was going
in the wash anyhow, sooner or later. I shuddered
to think what Ellen would have made of all this,
but I knew, I knew.

Later, in bed, I didn’t cry for us
the way Ellen would’ve done. As I told myself,
at least the plates were full & we bowed our heads
& thanked the Lord for the bounty we were about
to receive before we dug in, like we always did,
as if we were starving, as if it were our last meal
on earth. But like Ellen I said nothing to my parents
about what I’d learned that day in my fourth-grade
textbook, how it clung to my hands no matter
how hard I wiped them with that dishrag,
how bitter it still tasted on the tip of my tongue.

16 thoughts on "The Napkins"