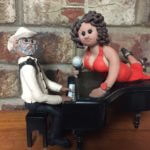 There once was a sitcom starring Mickey Rooney
That always had a self-contained opening comic scene,
Followed by a Green Giant commercial.

The giant was animated,
But not like the jolly cartoon character in later commercials.
This giant was a scary figure with a booming voice
Who stomped through the fields of vegetables.

I was probably five or six,
And I would run to my room,
Only to return to watch the show After the commercial ended.

One thought on "THE NOT-SO-JOLLY GREEN GIANT"