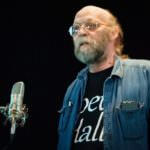 They’ve grown old next to each other on this landscape, so that, at first glance, there’s little to distinguish between them, touching as strong lovers do when they’ve become easy friends as well. Their hard-taught expressions across the fields they’ve overseen so long are as identical as the weather‘s wear on their faces, lined beyond recall. When seen closer, he’s just that much taller, smokes, needs glasses, leans to his left while she has a more pronounced list to her right. Either could easily be a slight bit younger, an addition to the other, but which is no matter. Another angry sky masses its many gray forces over the lake behind, but that only means another turn in the cycle to take in stride together.