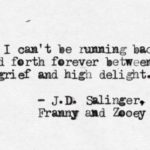 Grace Walking: A Poem for My Children

1. The words of the mother as concerning the children. 2. And it came to pass in the tenth month of the twenty-seventh year that I was met by the first messenger of God, called Mercy. He was the son of the morning; strong in stature, mighty in spirit, and great was my rejoicing in his laughter. 3. In the third month of the year of the Apocalypse the second messenger was brought forth unto me, and his name was called Faith for though he was given to uncertainty upon his deliverance, his hope remained steadfast.  He was a lover of justice, and I delighted in his smile and in his sharpness of mind and sight. 4. Unto me in the second month of the 32nd year, was the third messenger delivered and her name was called Compassion, for she beheld the Suffering of Man wth sympathy, and cared deeply for all things that grow and that have breath upon the face of the earth. 5. In the third month of the thirty-fifth year did the fourth messenger arrive and though I had grown tired and weary, he lifted me up. His name was called Love. His voice was strong and powerful and he was mighty in his fervent joy and affection. 6. And lo, I looked upon and beheld them as they fellowshipped together and I knew that it was good. And the name by which I called them was Grace Walking for they were the love and mercy, faith and compassion of God to me-ward and I cast my eyes upon them and am blessed.

12 thoughts on "Grace Walking: A Poem for My Children"