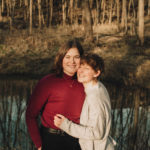 i’m writing this in the bathroom
so that i don’t come across as rude
or “always on her phone, kids these days”
because she’s right
this is exactly like my family vacations
and her’s would never say that me
but mine would.

all their conversations are about cousins
that they half-heartedly give me context about
or about themselves and their new home renovation projects
or how it was “a god-thing”
that they didn’t leave their suitcase at home
or how their pastor said
star trek vs. star wars
doesn’t really matter
because we’re all people,
and we’re allowed to have our different opinions
(which i guess is how
they feel about being republicans)
or about how they brought skinny pop
and the serving size is a half cup right?
how many calories is that, jeez?
wow! you ate that much already?
well you know how hard it is to keep that weight off as you get older,
but look at you two,
you tiny things.

they’ve already had two conversations
about how short she is
and her uncle reminds me of mine
in his mannerisms
and some kind of awkward energy i can’t quite place
and i feel sorry for her brother
only because he reminds me of my own
and her mom wants so badly
to win this game
that she makes it everybody’s fault
but her own
and i really do feel at home.

the second she stepped out of the car
i heard her dissociate
and hope that her edible would kick in soon
and i felt bad
for pulling out my thermos of wine
so early in the night
but after the first conversation
i didn’t feel so bad about it anymore
and a thermos of wine later
i don’t feel bad at all
about being secretly drunk at someone else’s family vacation
because after all the shit we’ve been through
we fucking deserve this.