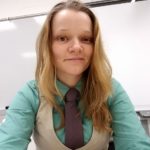 I am from Nottingham’s cobblestones still charred by the bonfire
that celebrated the end of WWII, from the grandmother without
a middle name and the grandfather who went every day by his.

I’m from the Norwegian immigrants only speaking English
to their kids born American in Minnesota and the grandmother
who had died in the room I was born in. I am from the father who never

ceased talking and the mother who never began. From Lake Erie perch
and suburban lawns, to piano recitals and pot plants growing
in the basement. I’m from chicken paprikash and dill dumplings,

fried clams and McDonald’s drive thru. I’m from “If you don’t have
anything nice to say, shut the fuck up” and “Let’s not talk about
unpleasant things,” from “There are certain things you don’t tell your mother.”

I am from Renaissance festival summers and Catholic school winters,
from belly dancers and paisley knitting ladies. I’m from a line of siblings
I do not know and people who either never move or never stop moving.

I’m from Glen Levitt and amaretto, from Law and Order SVU and Monty Python’s
Flying Circus, the spotlight and the dark closet, the questioning
and silence, the feast and famine, the praise and invisibility, the left

and the right, the foreign and the domestic, the believer and the atheist,
the elegant and the tawdry, naked and clothed, built and torn down, safe
and exploited. I am from the field where a dragon collided with numbers.

3 thoughts on "Where I’m From"