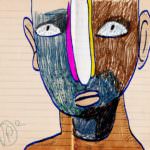 national poetry month began in ’96. allen ginsberg, national poet, passed in 1997. and now 20 years later i sit at a counter in a coffee shop writing freeverse as heather & steve try to stave off all-of-racism and prostitution as gender trap and the patriarchy of all the new non-profits in proliferation in a neighborhood that is eastside in name but cartographically north and hipster southern redneck in fadish tradition… anyway, the sun is flowering through the window onto a table of honey and fake sugar and stir straws as steve flips over his chair and heather slams him with a bookshelf so hard that the print flies off the pages and gather in a cup forming a latte and they both begin bleating and howling and then i recall that ginsberg wrote of sunflowers and i google it and he did…
and now
heather is talking about a rumor of drug dealers and drive-bys and they both are still sitting and sipping and everything is the same and nothing has changed so i bite down into a galette and stop fretting shit
until i slip out my skin ascending into eclipse as my remaining tendons thumb a poem and hit a submit button that transits bytes to bytes and aint a damn thing bitten and is this shit really written if god is a son of a glitch and darwin is bitching to him on how now are we to separate seed from chaff if all our harvests are intangible and our hearths digital and our lives are just light-based poems inside a dream at sunflower dot com.

13 thoughts on "Bowel (for lexpomo, napomo, and allen ginsberg)"