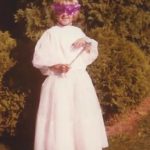 Today I made myself a peanut butter and jelly sandwich for lunch. Who would have guessed after a decade of school lunches featuring this exact combo, a meal I grew to dread and loathe because I so wanted to be one of the kids who bought rather than brought their lunch. The sheer boredom in lunch after lunch taking just PB and J on wheat bread because that’s how we rolled at our house, no unhealthy soft white bread for us. But today I cracked open the giant jar of peanut butter acquired at Costco with the sure knowledge that we would eat it up – me with my occasional sandwiches and college son with a stack of sandwiches when home. My sandwich made of Costco peanut butter and raspberry jam because why would any of Mildred’s grandchildren eat any flavor of jam other than raspberry. While I live hundreds of miles removed from those ancestral raspberry bushes fed on the tender flesh of grandchildren sent out to gather their fruit, today I am still able to feast on homemade raspberry jam because my friend loves me. Perhaps that is why I still eat PB and J – because each bite carries the weight of my history. The same sandwich that my father ate every day he worked at Eastman Kodak, the same jelly my grandmother, mother, and aunts canned every summer, a memory of sandwiches reluctantly eaten on lime green tables, and sweetest of all the memory of teaching my son how to make his own PB and J sandwiches so he would not starve while I worked – even though he always declared that my sandwiches tasted best and so I would sometimes, perhaps not often enough, step away from work to make him a sandwich even though I knew he could do it himself.