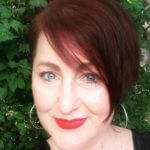 He prided himself on being Frank.
It was both his name and his philosophy on life.
Frank believed in being frank.

Especially with his daughters,
He believed to spare the truth was to spoil the child.
So, while his darling girls
Still wore darling curls,
He warned them about the world…
Especially men.

Beware.
Boys only want one thing.
Don’t succumb until you get a ring.
And even then, don’t act like you enjoy it.

Abstain from alcohol.
Except white wine
When you dine,
And then only half a glass…
Or first you’ll lose your head and then your reputation.

He lectured his daughters until the full moon rose,
On everything from communism to wearing seamed hose.
He told them to curb their feminine charm,
For it could only bring them harm.
He told them inhibition was their best friend.
He told them that all that mattered in the end,
Was whether or not they had been good girls.

One daughter heeded every word she heard,
And grew up to be the perfect wife
With the perfect life…
At least, from the outside looking in through her streak-free windows.

She married a man just like dear old dad,
And spent her years begirdled and apron-clad.
Each fall, she won the bake-off with her apple pie.
She never had an orgasm…didn’t even try.
She knitted chastity belts, which she sold at church bazaars.
And always went to bed before the stars…
Came out.

One sunny day in May,
She hung herself in the garage with a vacuum cord.
It snapped her neck, but not her strand of pearls.

From the same admonition,
Her sister found ammunition…
The knowledge needed to use her wile,
To live it up in style.

By sixteen, she’d tried every vice twice…
And mastered most.
Her life was a systematic study of sin,
Spent traveling the world with dangerous men,
Placing bets while drinking absinthe from a silver cup.
She never went to bed until the sun…
Came up.

Her penchant for perversion was spectacular.
Regret was not in her vernacular.
At eighty-two,
She opened a brothel in Peru.

Be careful, Daddies, what you say.