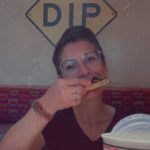 The blue moon was rising full
behind us as we drove
dead ahead into the dying sun.
The silhouettes of rickely stick fences stood
black like fish bones
against the ember glow.
We passed a pickup truck,
its back loaded full with waving children.
We came upon six wooden crosses
planted on a cliff above the ocean and
stopped to read the names–
Hector, Timiteo, Raul, Jose, Oscar y Joaquin.
Up the coast,
we saw what looked like a flock of big ducks,
their heads cradled back
in against their bodies for the night,
floating on a peaceful bay
but became small boats as we drew closer.
A sign announced Castro’s Fishing Place
and we pulled in….We picked bungalow No. 3.

Not having any cards,
we broke open the mezcal….
I had never french-kissed the worm before
and it was not my intention to start this night,
but the bastard caught me unawares
and slid into my mouth
like a limp screw,
wiggled around a bit
and jumped down my throat.
The experience was so profound
that I had to burst out the door
to savor the moment
in private.
It was a struggle,
but I kept it down
and am a much wiser man for it.

After that, things got a little fuzzy
(and I have the pictures to prove it).
I do remember us walking out
on to a rocky jetty
where the surf gushed into the crevices and
shot up in 50-foot geysers.
And I remember us serenading–
half in Spanish, half in Ingles and totally in gibberish–
Castro’s Fishing Place
with a joyously off-key song.
The words escape me now,
but they were surely profound.
And we surely must have sounded
like los tres happiest dogs in the world
yelping and howling
at the biggest,
bluest
moon.