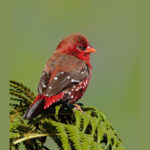 The sea rose up to leap and buck like a frothing beast,

spraying her cold spittle across the deck

and crashing her arms to sweep it clean.

Men scrambled to keep themselves secured,

and close them again.

and I turned away from the rail

my fingers ached from clutching,

turned my head to the sliver of sea still visible beyond a rattling doorway.

Mountains of water rose up,

taller and deeper than snow-teeth spires.
The ship perched aloft on a roaring crest,

across every plank and tied-shut sail.

I stared past the stinging spray

folded inside a mountainous wave.

My ears roared with the sound of my heartbeat,

and the world seemed silent in comparison.

veining and outlining the shape of vast wings that encircled the horizon.

and the water sucked downward in their absence.

I felt my stomach drop as the ship dropped into the chasm left behind.

screams rising up around me as the ship plummeted.

a golden head churning up out of the sea,

water sluicing off
an avian face
whipped with jagged, star-bright scars
Bleeding light out between each feather.

behind every splinter and pore.

The air split with thunder as its wings

to fill the sky.

I could feel it vibrating the wood beneath my fingers,

Could feel it in my clenched jaw,

halfway to gagging as it

flowing into its brow.

Between one breath and the next, the world went black.

The sky was a void of

Then, the eye opened.

and in it I could see two suns waking.

see sparks and oozing gold bubbling down its cheeks like molten metal,

All at once, thick ropes of lightning lanced out.

A black shadow of wings was cast across the clouds above.

illuminating the silhouetted shapes of

whales below and and

Jagged energy branching out and out

in an endless net of light and heat

and a whip-crack so sharp that