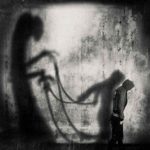 I asked my mama what’s wrong
With Sammy’s head. She said
His smart mouth, that’s what.
Smacked him where it hurt too,
As if he would learn something.

If Daddy wàs in prison, but he’s dead,
I’d set right down and write a letter.
And he’d write back, like God in heaven,
What’s wrong with you, they didn’t arrest
Your brother, throw him into Juvie.
He should have shut his mouth when they told him to.

You got enough to worry you boy,
Without crying about nothing.
Start acting like a man.
Stop worrying your mother.
Nathan’s Daddy wrote that
And I read it. (NEW VERSE)

He always said respect the police.
They’re crazy white men.Treat them Very careful.
You ain’t no child to them. You’re just a nigger.
Just like Mama said the same thing to Sammy.
She wimpered a little then,
Because of Justice. I think when she
Heard herself say it, she remembered Daddy.

2 thoughts on "FUCK THE POLICE"