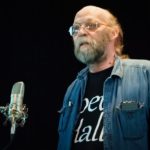 I saw your hand

raised in supplication, or perhaps farewell, out beyond the breakers. Your long fingers needed taking but were so far away. Later, walking the drying rocks at low tide, I found you curled in impossible mountain flowers, like a lover in the last, best embrace available. There was nothing I could have done except to wave back, and that would never be enough. Had there been a way to hold you, release you from the ropes you contested, something else would have waited on the next wave and the next. We both knew that but will never believe.