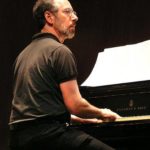 How about a film depicting a meeting between the leaders of India and the Soviet Union in 1947,
Where Gandhi throat-punched Stalin and made him cry?

Is it possible that Marco Polo had a twin brother,
Who went in the opposite direction,
And discovered Neverneverland?

Finally, what if Abraham Lincoln slew vampires at night?
Oh, wait.
Sorry, Quentin and Oliver, you dropped the ball on that one.

7 thoughts on "IF QUENTIN TARANTINO COLLABORATED WITH OLIVER STONE"