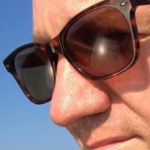 I got my first BB gun when I was twelve, at almost the
same time as my friend Mark from across the street got
his. In no time we were staging BB gun shootouts with each
other, constantly upping the ante on who could take a hit
without crying as we kept increasing the number of pumps
between each shot. We were tough hombres, tough indeed.

I remember to this day the angry red welts welts on my
back and my arms and legs, and one shot that came a
little too close for comfort, catching me behind my left
ear. We had a deal – no shooting above the neck. Mark
claims to this day that it was a mistake; I am inclined to
think it was just a way for him to try to steal a cheap win.

When my father finally caught us, we were stuck in the
middle of a standoff from which neither of us would
emerge for that one last perfect shot that might force
the other to surrender, me crouched behind the corner
of our front porch while Mark made himself thin behind
the huge oak tree directly across the street from my house.

Oh sure, it’s all fun and games until someone loses an eye,
my father said as he confiscated both of our guns and
headed across the street to turn Mark and his gun in to
his parents before taking me home for a chat, me following
as far behind as I dared, rubbing that spot behind my ear.
That was easily the longest two hundred feet I ever walked.

Looking back now, the thing I am struck by most is not
what my father said when we got home; I don’t remember
much of that; rather, to this day I smile at the one thing
he failed to mention, that being  just how much fun it
would have been if one of us had actually found an eye.

I was dying to say, it’s probably all fun and games if you
find an eye too, as I sat on the couch and listened to my
father lecture, that thought striking me as being more
than a little funny, proud of myself for having come up
with it. I kept looking for a opening to work that line in,
but my father didn’t seem much in the mood for irony, so
I followed my own wise counsel and kept my mouth shut.

Years later, when my own son talked me into getting him
a BB gun, my father came over for dinner and saw my son
in the back yard, pumping it up and shooting at tin cans
he had set up on the top of the fence. He watched for a
little and then offered the fun and games wisdom again,
and it was like I was back on the couch at my parents’ house.

This time I was ready for him. I paused for a moment and
then replied, Yeah, but it’s also probably all fun and games
if you find an eye too. My father frowned before turning to
look at me. You think that’d be funny? he asked gruffly, and
in that moment I knew I was right to keep my peace forty
years ago. Still, you have to admit, it’d be pretty cool, right?

4 thoughts on "Lost or Found"