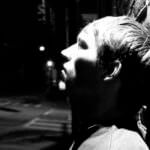 Little eyes watched from inside the restaurant.
I wasn’t aware of them at the time
but I would later hear
they never turned away.

I was tasked with changing the patio umbrellas,
blooming brighter, cleaner shades of blue.
The job had briefly been interrupted
the day before at the discovery
of a small wasp’s nest under the first umbrella.

My boss made aware, dispatched it quickly in the morning
and I returned to my chore.
Little eyes watched the work commence
where another complication would rise.

One resident was away
when home went away.

In angry confusion, the little nightmare
threatened to kill me the only way it knew how
in defense of territory it no longer owned.
It buzzed around for a few minutes scarily,
but was easily defeated by a well-timed swing of a tray.

Umbrellas went up, the task was done,
I returned to my routine day inside.
Though I never met the boy, his grandmother
had been waiting to speak to me.

Just days ago, the boy learned of another boy, a classmate.
That boy was at the park with his mother
when they discovered his allergy to wasps.
The fatal curse manifested only once,
sometimes once it all it takes.

Little eyes with little understanding
believed wasps to be deadly creatures,
that the battle I fought,
threatening only annoyance and pain to me,
was really a battle for my life.

So he watched intently,
ready to sound an alarm should I lose.
This man was not dying on his watch!

I wish I had met the boy.
I wanted to not only thank him
for being my guardian angel that day
but also to praise his humanity.

I also wanted to tell him one day
the truth of my encounter would show,
but despite the fact my life was never threatened,
he should always remember the good he did,
that kids like him would one day save the world.