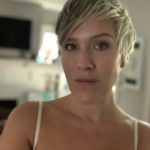 The raccoon was in the pool when we were called.
Which way will the narrative go? I can tell you this:
the raccoon wasn’t swimming. Having fallen from
a trap its body had agitated off the neighbor’s roof,
the raccoon was dead—drowned in an above-ground
pool. A landing unlike those in firefighter shows
in which the ones who are threatened abscond
from the threat that holds them like a prize no one
should take away, jumping from a window
onto an inflatable pad. You’ve thought it, surely: well,
that looks fun. Minus the loss, of course. Minus char.
The raccoon already stunk when we were called,
the neighbor having pulled it from the pool, unsure
of what to do next. As with most things, this could
have been a different story: we could be bringing
the raccoon tiki drinks, stretching out to reach it
afloat toward the middle of the pool, almost falling in
in our efforts and thus causing the raccoon to chatter,
which we’d interpret as a laugh, and even though
a laugh at us, at our “expense,” we’d be unbothered,
given the absurdity of the scene and the charm of
the raccoon, now twirling the tiki drink’s umbrella—
because there has to be an umbrella—and smacking
the water’s surface, chanting, “Make it rain, make it rain.”

5 thoughts on "Minus the Loss"