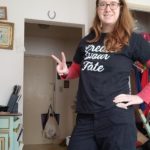 My earliest was about space-
I am up in a little NASA ship, solo, everytime.
(Later moved closer to Florida than I ever thought I would,
but perhaps I won’t ever attend a launch.)

After their house sold, I dreamed about
the home my grandparents had-
I am in the house.
I am purchasing the house.
Or just looking at the lawn, the gardens, the places
where everyone parked
from across the street,
as if I had just collected the mail
from the mailbox that
had been there. Yes, over there.

Before their house sold, the marching band dreams began-
Repetition rehearsed among band members.
I still belonged but I did not
have the choreography in my muscles anymore,
the hits I needed to mark on
the field under me. My legs forgot.

Once, I gave up caring if I knew. I performed anyway.
The last time the marching band came thru my dreams,
I knew they belonged to them, to someone else,
and I cheered them on
and remembered. It was me.
Me they belonged with.

Finally, the dreams caught up in degrees-
I am back in undergrad to complete a degree no one else cares about.
I still have the next degree higher, in dream.
It’s not a question.

I need to complete so many credits
in social sciences, in dream-accuracy,
and I feel confined
by the rooms, rules, textbooks.

The last time was the last time:
I quelled the theme before my dreaded
drag-along duty
deemed itself definitive:
In the dream I remember
how I traveled far, out beyond the quizzes,
lived through the essays, created

and studied firsthand accounts though
I was often the outsider.
The last time. It stopped quickly.