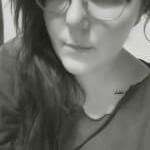 My mother says that it’s like an old sore song.
My song is as familiar to her as an old ringtone
she keeps forgetting to change.
She recognizes my immediacy to sit up straight
and ring that bell right when anyone ever asks:

“So, why did you go to school to be an English teacher if you’re just going to work in food service for the rest of your life?”

I always stare at my mother while I recite this script.
Like I memorized it in Sunday school and I’m excited for her to hear it.
But excuses are just leeway for gluttony.
The masochist in me needs to watch her face change.
Stay right there and look at what you did to your mother by sitting still
for years instead of growing up.
Don’t lose sight of her face when she is forced again
to accept your fathers irrationality in the voice of her only daughter.
She let his hateful grow inside her,
strong and out and finally forgot it.
And here you are with a mouth of excuses and his face.
Your reluctance towards living isn’t fair to her,
or the twenty three hours, or the C-section scar.
You are the only reason she can’t keep a belly ring in
so do something about the sacrifice.
His schizoid mean-mayhem echoes to her when I mention my pipedreams.
She remembers the plotline to my DNA
like a new alarm clock she called broke
instead of reading how to silence the ring.
That facial twitch was a memory of a stranger she recognizes all over me when she hears me lie about trying.

It’s the slight tilt of the body
when I say I don’t like high school.
Tongue clicks against teeth in a purse mouth
when I say I’ll figure it out.
She lights another cigarette
when I mention graduate school and my youth.
In the signed exhale, I wait at her tongue tip.

“What’s the point of another one,” she says
“When you haven’t even tried to use the first.

I fold my paper feelings up like soiled origami tissue
and stuff them into the ashtray that has become my mouth.
Burn up any thought that could have grown into a hazard.
I’ve got all my excuses and pipedreams lined up like
a folded hand of cards she dealt in my favor.
Everyone has bored, sad eyes at the fact that you still don’t
understand the rules of growing up.
The depression calls it ruining it, says she’s right,
that this body is just your fathers.
A statue of anxiety that’s been sleeping for six whole years,
While she has waited patiently for you to step finally off
from her aching backbone.
How dare you even think about the word tired
in a house full of women who still have Pikeville soil under their nailbeds.
Not from some man’s idea of struggled bootstraps,
some simple upper-body lift from entry level to professional
where words like trusted, worthy, and merit based raise live.
But from a gravel grave crawling up.
There’s no bootstraps and pulling when you’re barefoot and gnawing
at your own umbilical cord to afford to feed your hungry siblings.
Your only-child style vocabulary smells spoiled
when you try to define your version of a neglectful mother.
What would you know about struggle in the south?
The silver spoon she gave you is obstructing your rationale.
I’m beginning to see pain as a spectrum.
Some scars are so deep they become riverbed pits of muck retreat
that you keep hidden from yourself for safety.
Real pain looks like not talking about pain.
Not developing its frame in the black light of language.
Real anguish does not need to be repeated or found
It is compound and saying out loud wouldn’t make a damn bit of difference.
Denial is easier than forgiveness.
What is the point of pen on paper?
Poetry is just a sorry self-admission of weakness begging to be witnessed.
Do you remember your mother’s childhood? Because she doesn’t.
All she remembers is the repetitive sound of her own feet meeting the ground
There’s no sick leave childhood for your mother to take.
Since the death of her daddy she’d been paying everyone’s way.
Making all ends meet on a babysitter wage.
Watching her line cook mother get her hopes up on fate,
and luck, and men,
and moving them in,
and closing her eyes reluctant and relying
on a child to change her own old, sore song of
“I wills” and “just wait.”