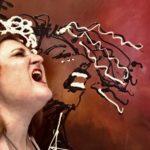 By the time my youngest son
Was old enough to fisH
His brothers had given up
Boyscouts and camping trips.
While he stood squealing
at live worms that climbed
The rim of the Styrofoam cup,

I thread their soft bodies onto barbed hooks.

He swung the Walmart reel,
His thumb on the release,
Swung it back and forth
Until casting barb and bate,
Sinking below the current,
Into the cool pocket at the river’s bend.

His brothers learned to fish five years ago

And now found other things to do,
Other than skipping stones and hunting fossils,
Other than running upstream to the place
Where clever fish evaded hooks,
Devoured worms in nips and tugs,

The bobber peacefully floating,
Unmoved by the feast below.