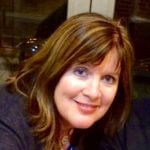 this Great Big Life. I closed the bedroom door
with my new 5-string until I learned fretting

and the strum-pluck rhythms of “John Henry.” Off
to college with the round-headed case, but no place—

never a found place—to make mistakes. I dragged that
banjo from year to year, stashed it beneath dorm beds,

inside apartment closets. Her final note botched
in front of my boyfriend’s parents, audience-induced

drum intact. But, I bought a pack of Martin Vegas, nickel-
wound for longer tone, and found the book I learned on.