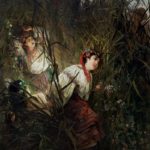 The Taffeta Tongue of Taffy Galumphkey

These threadbare verses,
some slick slivers of soap,
compel of congested chests
but awkward coughs—

as the sun-sucked grass
that a shiftless shaper
of shadowy fields is
stuffed and smudged with,
shrill as a show tune Bolger’d spit
from his hoarsened throat and this rickety garret—

(eclogues chaste and grave, methinks,
no profounder stain on my kitchen’s sink)

Where went Walt Whitman’s warbling lists
that I’d chewed upon some shrill seconds prior,
sopping with succulent spoondrift shucked
from illustrious hummocks,
from ancient American mountains
stole from a Salishan chieftain’s
blissfully lyricless vision plucked and,
sweet as a peach pit
clung along titian tendrils
teased to a saccharine tang,
suckled and spit amid posthumous bitterness
piled in creased and crooked splinters,
wove in pellucidly plastic rings;
what ambered waves waxed winter’s white,
unabashedly doused in delousing powder
or another drug dreadfully redder and rounder—

(American Spirit,
take what you want and do nothing with it.)

‘Twas music malingering, more than verse,
deceived and grieving its dutiful lyrics,
Waits’ words or the early works Eno had
studded in strange and rhythmic terms,
like slippery shadows of starlight sieved
from a dog-legged rift of alacritous backwash;
know, I’m about as much a poet as Shaw,
who peppered his plays in shy and sanguine symbols,
some leaden polemics’ industrious puppets
left stripping and picking at sinewy issues—

and here’s how I relate

3 thoughts on "The Taffeta Tongue of Taffy Galumphkey"