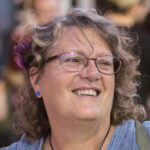 I Write and I Write

on the first day of june i write until almost noon.
not poetry for lexpomo, but minutes for a meeting
no one but a few came to, a meeting
with 5 or 6 presentations  by LFUCG divisions
and council members and I write emails, and I write
FB comments, and I write on a shared post about a virtual
person i met on zoom, now hiking the PCT
performing comedy hoping this trek
will launch him into the annals of infamy
and make him funnier than he was before.
needless to say I am impressed.
and I write
AC#E  CEGBb  EGBD GBD  and I take a break to blow
and I blow and I write more minor 7ths and I blow
and the I write some more and I go to the store and
I fix a latch that won’t unlatch my hatch, but it takes sweat
and contortions and I cook dinner and then I write
for comedy about my first vibrator and the trauma
I suffered while trying to decide
which one was the right one
and what if I pick one that’s wrong?
unless I can make it right it will be a waste
of money, but I picked a cheap one that used
batteries and was submergible, too, and less
than $50 and it was the right one because it lasted
15+ years until a few yesterdays ago when it blew
a bearing or threw a rod and I had to go buy a new one.
I went back to the walls of toys, some make noise
others tickle or heat up or pump
and try to choose, again, the right
one and think all the while that another just like the other
would be best, but they only had one similar,
and then I thought about how special I am
and how I deserve one that licks, does tricks,
or has a suction cup that does God knows what,
but I have to take into consideration the heft
of the hand held apparatus to be held by a twice
broken wrist and arthritic fingers that freeze and lock
and what about the size of the ship meant to part my lips
and the cost. I purchase a mid-price that looks sort of nice,
except I’ve never seen a teal penis
and I write and I write and I write, in my joke journal
with a pen and my broken frozen fingered hand,
but I bought the wrong one, but I’ll make it work
and try to go back for the one that’s just a plain John
that uses batteries and has no bells or whistles,
like my husband, as long as it gets the job done
and I write all this for lexpomo this very minute.

8 thoughts on "I Write and I Write"