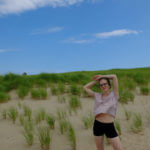 When We Can’t Make Sense, We Stop Trying

They call her too close for comfort. It seems the lighting’s gotten
the best of her. It’s a matter of identity and it would seem she
doesn’t have one. Like a sparrow struggling with the weight of a
too-large breadcrumb, she can’t get off the ground. Someone
suggests water torture. Another, drowning. But she can hold her
breath for years – and has. She’s the last of her kind, all her kin
fed to a pack of female wolves in heat. It’s an unfair plight, as
plights are wont to be. But the town looks after her, although, of
course, from a distance. She has a chair. And the pottery.
Sunflowers bloom every July and it’s been said she knows Jesus.
She reminds them of outlying thread counts and last year’s
birthday parties. When it’s cold, she smells of praying. They’re
trying to erect a monument in town but the number of drive-bys
creates unintended chaos. A charity mentions this uphill battle
in the newspaper, and she reads about it 3 months later when
using the paper to pack her pottery. She eats the evidence. The
sunflowers sour. It starts to rain.

7 thoughts on "When We Can’t Make Sense, We Stop Trying"