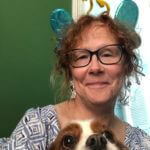 My grandson
Ozzy
with Caribbean blue eyes
has learned to point,
saying something in baby gibberish
that sounds like WOW! What is that?
But, it could be I want more watermelon.

Screeching and fussy at an outdoor restaurant
in Vieques, their colorful murals fading in evening light,
a rogue wind gusts–Ozzy’s voice is everywhere.
It’s past his bedtime, but the adults are on island time.

I take him into my arms, carry him into the street,
where it is dark, the wild horses are calm,
congregating at a corner, whispering, tails flicking.
He points up at an almost exact half slice of moon,
wavering, silver in mid-sky.

Moon is the only word he’s repeated for me.
(I have tried not to be incensed that he hasn’t called me MiMi yet).
I do like the word–it’s lulling o sounds, moon,
a lullaby in one word
moon
a favorite of poets and astronauts and
owls.