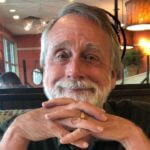 According to an Internet data search tool
574 people in the U.S. share his surname.

all fine people, but none of them is the one
who phones daily, never leaving a message.

Ring! Don’t pick up – see the screen name?
Scam Likely. What were his parents thinking?